The Girl in the Pale Blue Dress: Part 1 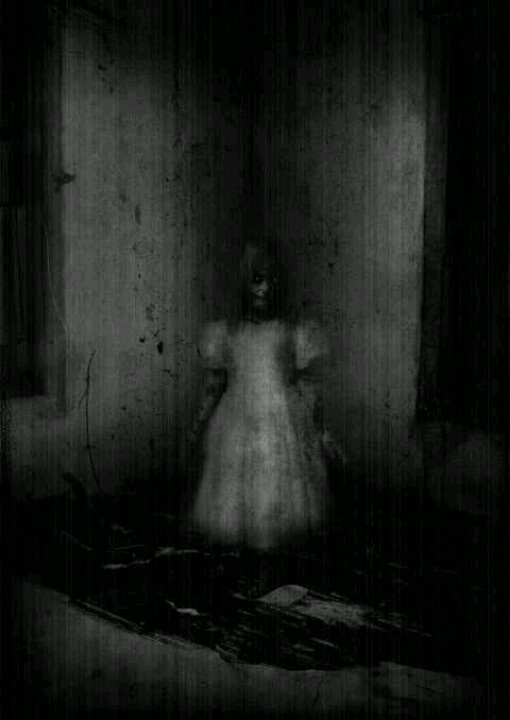 No matter how hard I tried to cover my ears the sound of its cries got through. These recent nights have left me restless with your unwanted taunts and teases. Wherever it has may have come from needs to go back. See, I thought it were just a figment my tired mind sent to mess with me and keep me up. Endless nights of insomnia left me with no line of what is or isn’t reality.

At first I didn’t see it as part of my reality so I started replying to its little messages of wanting to play. Its giggles would permeate my ears and I’d find myself laughing by its side. After weeks of insomnia I finally got a good night’s sleep with the new medication my doctor had given me. It was until a couple of nights ago that it woke me out of my sleep that I realized she is real.

Her small pale frail hands were cold against my skin as its broad grin and sullen eyes stared at my fear stricken face. I don’t think I truly looked at it before. She weren’t more than five feet tall and had thin tendrils of blonde hair coming from her round head. The pale blue dress it wore was rag-like with holes and patches adorning it; though its overall appearance terrified me the rotted wounds covering the bare parts of her skin made me cringe. Maggots and other bugs were crawling around in them, but the creepiest part of all was its straight white flawless teeth.

Since you didn’t receive a reaction from you shook me again. This time with enough force to knock me out of bed. Play, is all that you said as you stared up at me with those sunken blue eyes. I couldn’t speak or move hell I could barely breathe. Play, it said to me again. Terror seemed to let me go at that moment, but I’d soon regret what I said to it.

It got angry then. The photos and paintings on the wall of my room began to shake. Frozen in horror I couldn’t do anything but stand in place. The bed flipped over and the computer got smashed against the wall. Objects started flying towards me as I heard her scream, Play with me. I’m unsure of how long I was dodging objects, but the light from the sun snuck between the blinds alerting me of morning. After everything stopped flying, I looked around to see if the little girl was still there. She left.

The Girl in the Pale Blue Dress