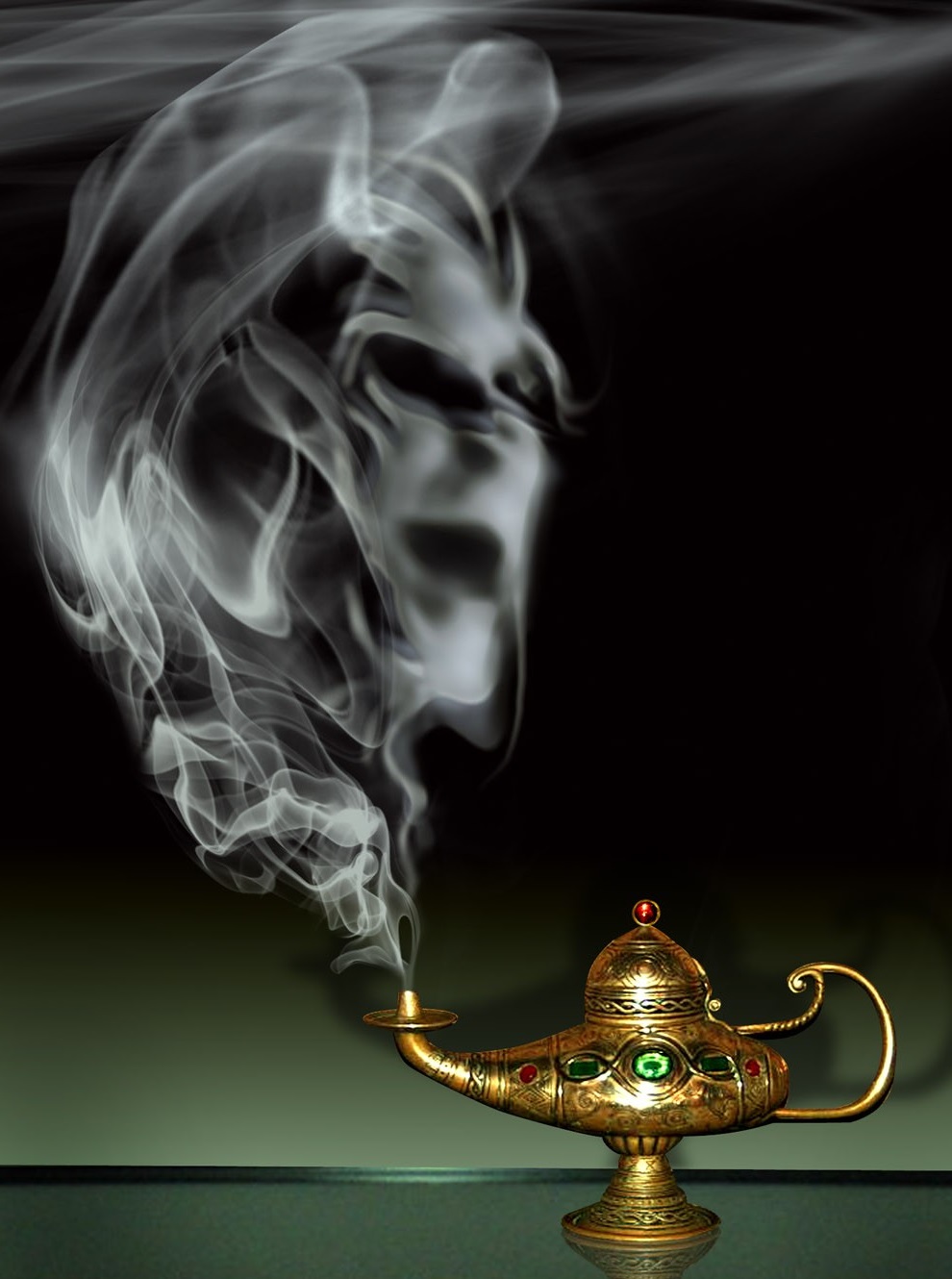 With a huff, I turned to enter the cave, but not before catching a glimpse of a hare brustling about in the bushes. Sara was already ahead of me in the cave, so I crouched low and slow as to not scare it off. It’s back was turned to me as I quietly pulled a knife from my boot. It didn’t seem to notice me before I pounced and grabbed it. In a quick motioned I snapped its neck.

I was fastening the rabbit to my belt for later when I heard Sara scream. Entering the cave at full speed, I quickly came into view of Sara being hoisted into the air by the djinn. It held her by the neck while laughing until it saw me.

A slow creepy smiled appeared on its face as it turned towards me. As its attention was averted, I saw Sara take a couple of the jewels that were stitched onto its vest. It didn’t seem to notice it.

“Let her go. I’m the one you want,” I said, trying to sound as brave as I could.

It threw Sara a few feet behind it before walking towards me. Its flesh has almost fully regenerated, but it just needed one more thing. Me.

Suddenly, I was lifted off my feet and into the air. It felt as if something was tightening around my throat. The djinn was using some of its magic as it held me in place. The thought of giving up crossed my mind as it became harder and harder to breathe. That was just before I saw Sara standing behind it with a burning torch, the paper with the incantation, and the two jewels she took from its body.

With all the strength I could muster I grabbed the rabbit from my belt and threw it as far as I could to her. The djinn dodged it thinking it was meant to hit it, so it didn’t bother looking back. Sara quickly, but quietly grabbed the rabbit and took off to the back of the cave.

The djinn looked behind noticing Sara take off without me. It turned back towards me smiling with its pearly white. A second later I ended up being thrown against a wall. My vision went in and out as I gasped for air. The moment my composure was regained, a force knocked me back onto my back.

An evil laugh saturated the air, and in that moment, I knew I was going to die. The djinn slowly made its way towards me with a sinister look upon its face.

“You thought you could escape me, shabb,” it said. “You have been left alone for me to peacefully feast upon your eyes.”

Then once again my body was thrown into the nearest wall causing the wind to be knocked out of me.

“But not before I break you. Just tell me that I can have your eyes and it will all be over.”

Another slam into the wall, and finally I realize that I forgot one of the most important things. I must give my eyes freely to it for it to fully regenerate, and for its powers to be fully restored.

Over and over my body was thrown against the wall, until I heard it. Sara was speaking the words of the incantation we read about that would end this. End it. My vision came back into focus when I noticed the djinn look towards the back of the cave. I had to quickly do something to get its focus off Sara.

“What do I get if I offer them over to you freely?” I ask the djinn.

It appeared right in front of me after that moment. Its rancid breath singed the hairs in my nose as it brought its face closer to mine.

“What is it that you desire?” it asked. It kept looking from me to the back of the cave where Sara was. “Hurry, shabb. Or I’ll have to kill your friend.”

“What can you give?” I asked in hopes of stalling for more time.

“Give them over freely, or I will have to kill your friend here, shabb!”

Sara shook her head no but continued the spell. The skin on the djinn began to slowly rot.

I shook my head “no” the best I could with my throat in its hands. The horrid screech that came from the djinn busted my left eardrum, but not before it let me go. It turned towards Sara, and in the moment in took a swipe at her it disappeared back into its lamp.

Sara and I remained silent as if unsure the incantation worked. Once we realized that we had succeeded, we collapsed into tears. A couple of broken ribs, one ear to hear out of, and a safe Sara weren’t all that I was left with after this nightmare. I will forever have to move forward with the deaths of my classmates and professors on my hands.