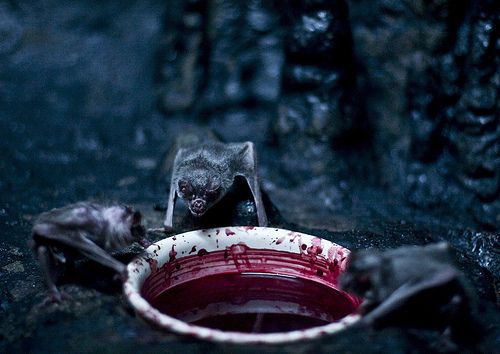 A pounding headache awaits as I wake from my drunken slumber. The lawnmower my neighbor uses every Saturday morning sounds like thunder as I struggle to get my bearings. After several blinks, my vision clears, and the sun attacks my eyes with a vengeance. I stumble towards my window, and shut the blinds before walking to the bathroom. With a few splashes of water to the face, I feel a bit refreshed, but a glance in the mirror tells me otherwise.

My cocoa skin looks a little pale, making the dark circles around my eyes prominent. Shame approaches as I take in my full appearance. Plum lipstick is smudged halfway across my face, mascara smudged, and the afro puff that I had in the other night somehow became a matted afro. With a sigh, I hop in the shower letting the warm water rejuvenate me. After a quick shower, I wipe away the foggy mirror and attempt to tame my kinky locks until I notice something on my neck.

I inch so close to the mirror that my forehead smashes against causing my headache to come back full throttle. Upon further inspection, it looked like I was bitten by something. There were two puncture wounds that were slightly raised on the right side of my neck; however, it wasn’t painful to touch. Without further thought on the wound, I left the bathroom to get dressed.

After downing a couple of asprin, I fixed myself some avocado toast and coffee for breakfast. As I ate, I thought back to last night, trying to piece together the bits and pieces that I could remember. I remember meeting a few friends at a bar after work yesterday. It was this new place in the city that was hidden somewhere in an alley that looked sketchy, but my friends and I still went inside. I remember the place was a little dark with red light slightly illuminating the place. I remember taking several shot of tequila, getting into an argument with a man that bumped into me, and then kissing him.

He was about five inches taller than me, and I’m already close to six feet. He had long black dreadlocks that hung to the middle of his back in a ponytail. I remember his eyes looked red from the lighting in the bar, and a set of pearly whites that was damn near blinding. He had a muscular build that I could tell from the way his black sweater clung to his skin, and he wasn’t bad to look at. There was a dance floor there, and remember dancing with him for a bit before I separated from my friends. Then there was a flashback of him and I in the bathroom having sex, and then…pain. Instinctively I reached for the wound on my neck, and then it all became clear.

I remember him gliding in and out of me with such ease as he pinned my back against the stall door. My legs were wrapped around his waist, and I had a fist full of his hair as we continued to loudly fuck for all to hear. I think his name was Cole or Colt, something like that. I moaned his name over and over until he asked me to stay with him forever. I’ve never felt so turned on, high on ecstasy, and screamed out yes as I came all over his hard shaft. He didn’t stop plunging into me after I came. His movements became quicker and more urgent before he started sucking on my neck. A pleasure I never felt before sent me over the edge. Never have I came so quickly.

Just thinking about last night has me wet as I sit here eating, but then I remembered something else. I remember that the pleasure that I was feeling was quickly replaced with pain. Before I was able to scream, he told me to be quiet and I did. My memory got a little choppy after that. He walked me out of the bar, then we somehow ended up at my house in the next instance. When we were inside he laid me down on the bed, and cut his wrist? Why? Then I remember he put it up to my mouth, and tasting metal.

In reaction, my stomach turned and I ran to the kitchen sink to hurl out my breakfast. Beads of sweat littered my face as I stayed bent over staring into the sink. Last night couldn’t have happened, right? Maybe it was a bad dream, but then why did I wake up in the same clothes I wore the night before? Why was there this puncture wound on my neck? Before I could think of any other questions, a chill ran down my spine. I felt another presence in the kitchen with me. I turned slightly to my right, and there he was. The man that I was with last night sitting at the table staring at me with such a loving look on his face.

Corner Of My Eye