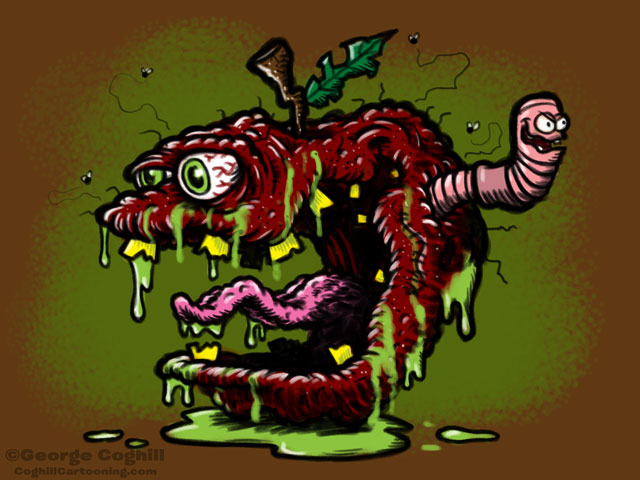 Do you remember your parents telling you never to accept things from a stranger as a child? I do, but like with all children I didn’t listen. In my younger years I was a rebellious child; one filled with energy and life. Every day was a new adventure to me, and I wouldn’t allow the nagging of my parents to tell me how to live. Ever make a decision and regret it? I have. There is this one that I made a long time ago as a child, and till this day I still suffer from it.

I must have been about 9 years old when it happened. It was an exceptionally sunny day without a cloud in the sky. It was summer. My mother, Kate, took me along with her to the grocery store that day. Mom always took me along. She knew I had a knack for naming every fruit in the produce aisle, and she usually rewarded me with a granny smith apple. However, this day would be different. How? Well, it’s from never heeding the advice from my parents. If I knew something like this would happen, I wouldn’t have done what I did.

Like any trip to the grocery store, it was filled with people bustling about. People of all shapes and sizes, talking or yelling hurrying about gathering all of the things they need for home. Mom always made me hold her hand when we go to the grocery store. As of late, there have been many talks of children disappearing when the parent isn’t looking, but none of that concerned me. I was young, foolish and innocent. We made our way down the aisle filled with bread and things for baking. Mom was going to make a cake for dad’s birthday tomorrow, and she was going to let me help.

After about 10 minutes a lady walks up to my mom and asks her a few things. I didn’t catch what they were talking about. I was more concerned about the man in all black standing in the corner with candied apples. Back then, I had an obsession for them. The man directed his eye sight towards me, and with one boney finger he beckoned me to come. Of course I obliged. His appearance didn’t hinder me from making a direct course towards him and those apples.

“Would you care for a candied apple, young one?” the man asked. He leaned the tray of apples down towards me, and swiped his hands over his delicacies as if showing his best work.

“No worries young lad. These are free, specially made for children like you,” he said. He took an apple from the tray, and handed me one dripping with caramel sauce and adorned with nuts. It was the plainest looking candied apple I ever saw, but that didn’t stop me from accepting.

“One thing young man,” he says. “There is always a price. You may not be charged now, but you will in the future. Are you willing to pay the unknown price?”

Now I stop and think for a second. How is he going to find me to charge me? There was a deep churning in the pit of my stomach, but all of that went away as I looked at the delicacy in my hand.

“Yes,” I reply, and went ahead with taking a bite out of the apple. It was the most delicious thing I ever tasted. Juicy and succulent, and the caramel were the best part. It took only a few minutes to finish the entire apple, and then my mom saw me.

“Tyler! What were you eating? Get back over here! Didn’t I tell you not to leave my side?” she yelled.

“But the man here was giving out free candy apples mom!” I exclaimed.

“Sweetie there is no man there. Come, it’s time to go.” I turned to my left and there was no man standing there any longer. I looked around because he couldn’t have gotten far. Still, there was no sign.

I soon forgot about the man and the scrumptious apples he carried. It wasn’t until my nineteenth birthday when I had to pay the price he so called mentioned. I didn’t pay attention to it back then, but that churning in my stomach was a warning. I wish I would have paid attention to my instincts, and I wish I had listened to my mother.

I had just graduated high school, and began to pack to move into my college dorm a week or so later. Elated to move on to the next chapter in my life, I didn’t notice when things started taking a turn for the worst. It happened a few weeks after seeing that man in the grocery store. You know the man? The same man from my child hood, and boy…I never expected to see him again. The encounter I had with him was interesting. It is one that I would never come to forget.

Like always, I accompanied my mother to the grocery store. We separated to gather the things needed for the family barbecue the next day. I wasn’t paying attention to where I was going. Like all teenagers, my head was in my phone, and I ended up bumping into this poor fellow; the same man dressed in black. I proceeded with a slew of apologies knowing it is my fault for not paying attention, then he spoke.

“No worries young lad. It is good to see you again,” he stated in a nasally voice.

He stood just shy of six feet tall, dressed in all black, and had a hood on. I didn’t notice back then, but he was dressed the same. It was a mere ninety degrees outside and he was dressed as if it was fall. But that was not what startled me. Standing a few inches over him, I looked down and saw his face. Pasty white, with skin so wrinkled, it reminded me of a scrunched up shirt. He looked old, but didn’t sound it. He was also very thin, almost as if he was starving, and he had the same candied apples that he had back then.

“Nice to see you again too sir,” I reply politely.

I knew what he was referring to. That damn candied apple. “I’m sorry?”

The man looks up at me, black eyes glistening, “For the apple you accepted as a child. Do you remember that there is a price? Are you ready to pay?”

I couldn’t believe it. How can this man recognize me at this age? Why is he asking me about a price now? “Look I remember. I have five bucks on me. Will that suffice?” I ask the man.

“Oh no dear boy, money is not the price for the apple you ate,” he states. He looks at me with a mischievous gleam in his eyes.

“Then what is it that you want,” I say annoyed.

“Ok so you’re crazy,” I say as I take out the five dollar bill and place it on the tray. “Please don’t bother me any longer.”

As I begin to walk off he says to me, “There are going to be consequences if you do not give me your youth. Heed me words.”

Without a reply, I walked away. That churning in my stomach grew stronger with every step I took away from the weirdo. I chanced a glance back, and when I did the guy was no longer there. Weird I thought. Maybe I should report this to someone. I thought to myself. But who would believe me?

My mother calls my name and I see her waving to me from the long line. She asks me if I am feeling well, and I tell her yes. I lied. The churning is stronger than ever, but when we leave the store it dissipates. I chalk it all down to the uneasiness of the encounter I had with that strange man. I hope to never run into him again.